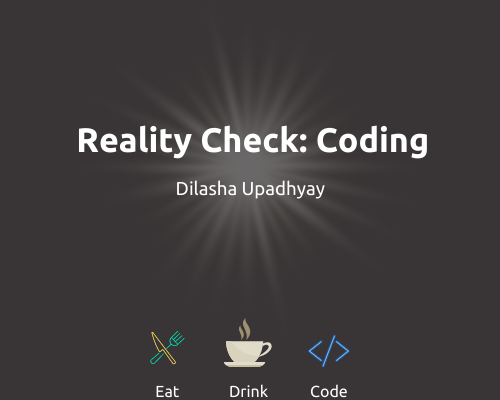 As portrayed in the movies, those who are termed as “The Coders” are usually people depicted as having dorky glasses, surrounding themselves with wide screens with dark themes, thousands of numbers and lines of codes floating around in their screen, and only God knows what they type out in some seconds that makes them successfully hack any website, no matter how secure it is. Weren’t you fascinated & inspired by that act of coolness? I am not sure about you, but, I definitely became a big fan of those cool stuff, dark themes, headphones, working space, and many more!

But, let me ask you this, “Are movies actually showing us the reality?”

The bitter truth is that the movie only portrays “the satisfactory part of coding but miserably fails to address the stressful coding process and in fact totally neglects it.” The movies also set completely wrong and unrealistic standards for people which includes always wearing glasses and having a lot of expensive monitors just to begin the journey into coding. The movie shows us the final phase of coding that works just as instructed, leaving us with no understanding of thousand of hours spent developing that idea, all those frustrating hours spent trying to learn different languages and syntax, the errors that prevented the code from running, the bugs that had to be fixed a hundred times, the caffeine intake, the breaking of a REM cycle, those backaches, headaches and the unusual working hours.

People often think that coders just sit and write code all day long. It’s not just to write code; a lot of time is spent brainstorming the idea! You have to understand what the problem is so that you can think of concrete and best possible solutions. As it’s basic to plan out, to lay out the ideas, the strategies, before beginning anything! There’s a lot of bugs, there’s a lot of issues. You’re going to be fixing bugs. You’re going to have to spend more time interpreting someone else’s code and dealing with it than you will create new code.

People assume coders to have known everything on their own and the brain is academically gifted. There is a lot of hard work, patience, understanding, and practice behind their so-called perfect demeanour. Neither I am here trying to scare the chills out of you, nor, I am trying to demotivate you. But, as I see the people romanticizing the pleasant part of coding way too much, I’m just trying to show the other side of the story.

Coding is the behind-the-scenes of everything created on the internet. Our world revolves around technology and understanding how it works will never do you anything wrong. Understanding humans have never been a piece of cake. So imagine how difficult it would be to comprehend computers. Even while it may appear terrifying, it is worth the effort. Computers don’t comprehend human language, so we learn their language to communicate with them and develop something that will work for us. Coding is a medium to bring your idea into the real world. Even though your approach may appear unrealistic to a certain extent for people who find it difficult to think about undertaking original tasks rather than existing ones. However, having a good grasp of what you want to do and knowing the fundamentals of coding makes it happen for you. Coding helps us utilize our own code to automate a lot of the repetitive tasks you have to do on a daily basis.

Launching your own apps based on your drafts codes sounds the most satisfying thing to do. Coding allows you to be successful on your own, rather than relying entirely on a 9-to-5 job for your success. Not only that but, it makes it easier to keep track of your progress because you start with printf (“Hello world!”); and work your way up to your dream startup. Coding is a powerful skill that everyone should learn at some point in their lives. Moreover, learning how to code doesn’t require an ideal age or an ideal institution; you can start learning it regardless of your age or the sector you work for. You can find all the basics about coding on the internet that addresses all your queries and allows you to begin coding with the bare minimum of resources.

What is it like to walk into a classroom full of computer students? We find students that have been coding since they were in class eight and students that are just about to start. Students that have already begun working for startups and have access to really impressive gadgets. Entering a class full of coding enthusiasts may seem intimidating to novices but this isn’t an excuse to think you’re unworthy. With time, you’ll get there; you just need to get started.

Getting a computer science degree is always a good idea because it allows you to work on projects throughout your university life and meet individuals who share your interest in coding, as well as connect you to better internship prospects.

My personal experience with coding is bittersweet. Stack Overflow is my best friend and some random youtube tutor teaches me more than what I’ve learned in an entire academic semester. I’ve spent hours searching for probable errors because I missed a “;” on line 11th of my codes. The same piece of code works and doesn’t work at the same time. I thought getting a degree in computer science would just require learning about computers but the heavy textbooks of physics, math, chemistry follow you as well. The engineering drawing which makes you feel so miserable at times is also taught in the very first year which makes you rethink choosing engineering as your major!

Coding is cool, it is an art. Art helps us experiment with our ideas, brainstorm every single piece that we have just to create something on our own with the same resources that are needed in the learning process. It might be frustrating at times but equally rewarding. It is not as tough as it is thought of and not as simple as it seems. If you possess the skill of coding, this will help you no matter which sector you work for.
I hope whichever phase of coding you are in, whether you are just in the beginning or somewhere in the middle, lost in the mess, I believe that you can get your way out of it and successfully achieve your WHY for beginning your journey into coding.